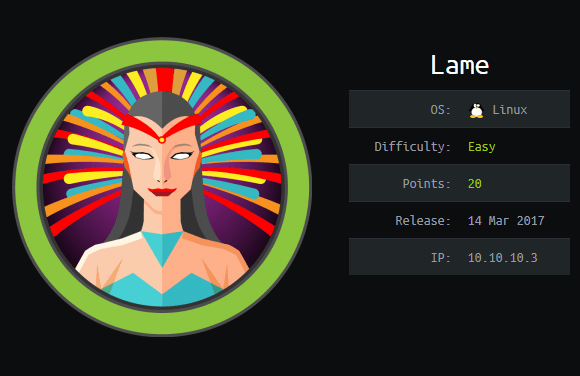 Lame is the first machine published on HackTheBox which is vulnerable to SAMBA 3.0.20 (CVE-2007-2447) and Distcc(CVE-2004-2687) exploits. First we will own root using SAMBA exploit manually and later with Metasploit. We’ll also use Distcc exploit which unlike samba exploit gives us user shell and thus further we will use various privilege escalation methods like nmap SUID binary, Weak SSH Key, UnrealIRCd to gain root shell.

Based on our scan results we found the following services running on respective ports:

Lets enumerate these ports further to find out if any of these services are misconfigured or running vulnerable versions.

Anonymous login is allowed on FTP but the directory is empty, so we can move ahead:

We can use nmap script to confirm this vulnerability.

Based on the script output we can see the host is not vulnerable to vsftpd 2.3.4 backdoor command execution.

Using null session with crackmapexec we discover we have READ,WRITE access to tmp directory

Let’s enumerate the tmp directory using smbclient. Since this box is running an older version of SMB, on newer client we cannot use smbclient without adding older protocol config to /etc/samba/smb.conf

Credits to 0xdf for providing the protocol info on his Write-up.

We can either add the above config to our /etc/samba/smb.conf or we can use the command line option:

We don’t find anything useful inside the tmp directory.

Searching for samba 3.0 on searchsploit reveals it has quite some vulnerabilities:

Looking at the Metasploit script we discover this is CVE-2007-2447 also known as Samba Usermap script.

Further analysis on Metasploit script indicates the vulnerability is in the Username field which takes the below parameter along with the payload.

In POSIX or POSIX-like shells (ksh, bash, ash, zsh, yash), The command in the braces of $() or between the backticks (``) is executed in a subshell and the output is then placed in the original command.

Metasploit is using the nohup command short for no hang up which is a command in Linux systems that keep processes running even after exiting the shell or terminal and starting the process outside of current context then a payload.

Getting a call back on our nc listener

We got the shell as root.

We can also use the smbexec command from crackmapexec to send our payload and execute it:

While searching for CVE-2007-2447 exploits, I came across this python-script from amriunix, Usage and guidelines to install dependencies is available on the repo.

Using usermap script we can instantly get a reverse shell:

As soon as the script is executed, we get a call back on our nc listener:

Using any of the above methods we get a shell as root from where we can grab our flags.

Since we have already exploited samba 3.0 manually, let’s also exploit it with Metasploit:

We get the shell as root with Metasploit as well.

Distcc is a program designed to distribute compiling tasks across a network to participating hosts. It is comprised of a server, distccd, and a client program, distcc. Distcc can work transparently with ccache, Portage, and Automake with a small amount of setup.

A Quick google search reveals Distccd v1 is vulnerable to command execution and we also an have nmap script to test this vulnerability.

If the script is not available in nmap package by default, you can download it from here and place it in the nmap scripts directory.

Based on the nmap script results we can see the host is vulnerable to CVE-2004-2687 and output of id command inside the script is displays as user daemon.

We can use the argument parameter of the script to change the command from id to reverse shell payload:

As soon as the script execution completes, we get a call back on nc listener:

Since we are running as under privileged user daemon, lets try different privilege escalation methods to gain root.

We can use find command to search for SUID binaries on the machine:

Out of all the SUID binaries, most intresting is nmap. We can use gtfo guidelines for nmap to escalate privileges and grab our flags.

Credits to 0xdf for pointing out this privilege escalation vector.

We can see user Daemon can read contents of root directory except for root.txt. Inside .ssh directory we are able to read public keys file authorized_keys:

Looking at the user as msfadmin@metasploitable from authorized_keys it might be possible that this could be vulnerable to CVE-2008-0166 where the random number generator in OpenSSL broke for a period of time causing some SSH keys, to be brute forcible from the public key.

We will use g0tmi1k’s repo to exploit this vulnerability.

After extracting debian_ssh_rsa_2048_x86.tar.bz2, we can use grep and lr for recursive search to just display the filename with the public key.

Now we can use the matching private key, but first we need to chmod 600 the key to own it and then SSH to box as root:

Looking the listening services on the machine, we can see port 6697 which could be IRC over SSL.

While looking at the processes running on the machine, we can see UnrealIRCd is running as root

With reference to this article we can exploit this UnrealIRCd to create a backdoor and get a shell as root.

We get output as Metasploitable which indicates we are on right track. In order to easily use the backdoor, we could use the known method of connect-back shell.

Getting a call back on our nc listener as user root:

Thanks for reading, Feedback is appreciated !

Fuse is based on Printers in corporate environment making it quite realistic machine, We’ll complete it using both Intended and Unintended method. We start off with web enumeration of a printer ...